The Swedish Genealogical Society of Colorado and
The Denver Public Library presents
Peter Bergstrom: Swedish Immigrant Worker and Entrepreneur,
a traveling exhibit on display from
March 1, 2016 through May 31, 2016 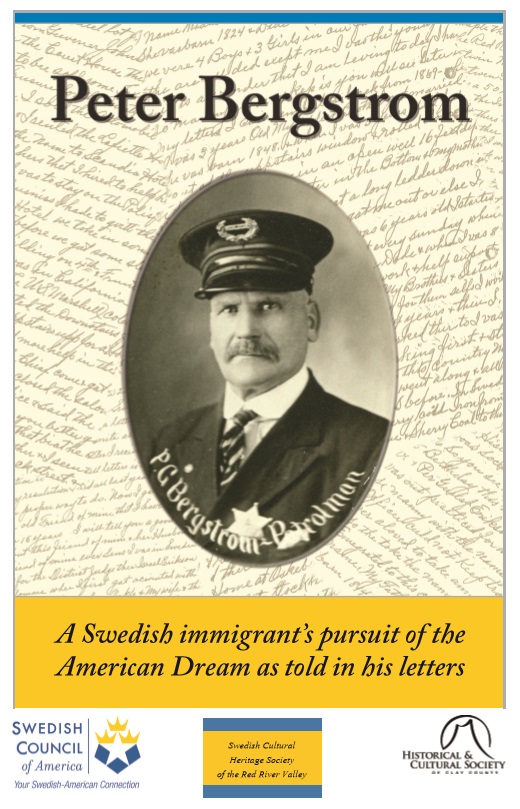 Come visit Peter Bergstrom: Swedish Immigrant Worker and Entrepreneur, a traveling exhibit about a Swedish immigrant’s pursuit of the American Dream as told through letters written to a pen pal in Sweden. Through several photographs and letters that were sent back to Sweden, one can experience Peter Bergstrom’s colorful trail through America. It portrays his ability to become a jack-of-all-trades, his family life and trials, and his determination to succeed

The exhibit grew out of a classroom project of Dr. Joy Lintelman’s Scandinavian Immigration course at Concordia College, Moorhead, MN. Dr. Lintelman discovered a collection of letters written by Peter Bergstrom at the Swedish Emigrant Institute in Växjö, Sweden. Lintelman incorporated the letters into her class and supervised the students’ research as they turned it all into a website.

The Historical and Cultural Society of Clay County staff worked with Lintelman and her assistant, Jenny Battcher, to turn the research into the exhibit. This exhibit was supported in part by the Swedish American Council and the Swedish Cultural Heritage Society of the Red River Valley.

This exhibit is on temporary loan from the Historical and Cultural Society of Clay County.

Presentation Title: Using Swedish Tax Records to Answer Tough Genealogical Questions Tax records are a little used, but excellent resource, for solving the “unsolvable” 18th century problem of record loss/gaps and end of the line extensions. Tax records fill in when clerical surveys are not extant.

If you have ever wanted to see a Fika session, this is your chance to see how it goes. With Zoom, we’ll get a close up look at how Kjell finds things for SGSC members in Swedish Records. We’ll also see how he launches members on their Swedish research journey or helps them break through

Ron Floberg had been trying to find the soldier records for one of his ancestors in the hope that it would provide missing information or clarify conflicting information. With Bev Harbourt’s help, they embarked on a journey to find that soldier. The presentation shows how they were able to find the ancestor and the answers

Kjell Andersson, SGSC’s Research/Mentoring Chair gives a presentation on how to use some of the best tools for researching our ancestors in Sweden and the steps they took to cross the pond to America. Emibas: find where they lived and what parish they left from Emiham – ship manifest information EmiWeb – emigration and immigration